What’s the DEEL? Department of Education and Early Learning

Article in The Urbanist: 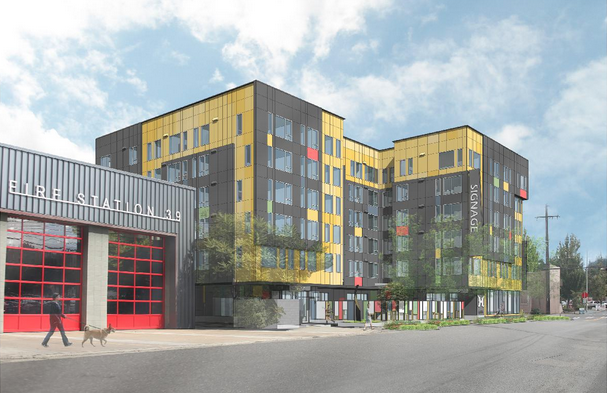 The Northeast Design Review Board will hold the first recommendation meeting tonight for a 6-story 70-apartment building the Low Income Housing Institute (LIHI) plans to build in Lake City. The project will include a preschool, daycare center, and nine parking stalls. Apartments would serve tenants at a range of income levels from 0 to 60 percent of area median income, which roughly means two-bedroom units would rent for no higher than $1200 and three-bedrooms no higher than $1400.

Lake City is somewhat unique in the degree of community involvement in urban design thanks to a three-year envisioning project that established a framework and led the neighborhood to ask for a civic core rezone with stronger pedestrian and urban design standards.

Historically, Lake City was defined by its auto-oriented character. The design proposal layouts how Lake City Way was a thoroughfare for the region early in the automobile era and a commercial focal point that apparently eclipsed the trolley corridor. Lake City was a township of more than 40,000 when it incorporated in 1949—that was good enough for fourth largest community in the state. However, in an all too common story in auto-oriented retail, a bigger draw came in the Northgate Mall in 1950 and I-5 further altered transportation and commerce patterns when it opened in 1967, both of which pulled customers and commercial vitality from Lake City.

The envisioning project seeks to flip the script and make a more vital Lake City with a human-scaled walkable environment. The LIHI building aims to do its own part to achieve that goal with more inviting sidewalks, better pedestrian crossings, and lush landscaping. Architects selected Urban Pinnacle Oaks to anchor the landscaping, which is also filled in with a variety of plants, such as Munchkin Oakleaf Hydrangea, Creeping Lily Turf, Coastal Strawberry, Fragrant Sweetbox, and Pink Fountain Grass.

The site’s sparing use of parking reflects the solid transit in the area. The 65 bus, which runs to University of Washington, stops just outside the site; the 41, which runs express via I-5 to downtown, stops a double-block to the south on 125th St, and the 372 and the 522 stop at Lake City Way and 125th St, a four-minute walk. Minimal parking also makes providing affordable housing easier by avoiding the high cost of building parking.

The childcare facility includes an outdoor play area surrounded by a colorful fence. The architects aim to improve the “eyes on the street” effect with administrative offices and preschool classroom’s windows pointing out to the street. Both kids and adults can seek further on-site recreation opportunities on the rooftop deck, which includes another play area, lounge and picnic seating, a p-patch garden, a fire pit, and trees. The roof also includes three separate photo-voltaic solar arrays that will provide renewable energy on-site.

This LIHI project in Lake City is the type of project that should be going up in every neighborhood in the city as we cope with an affordability crisis and try to house an estimated 3,000 homeless people. If your neighborhood’s zoning doesn’t allow a multi-family project like this, you might ask yourself why not. The building is designed with careful deference to the neighborhood’s wishes as expressed by its envisioning project and neighborhood plan. Landscaping beautifies the streetscape; better sidewalks improve the block’s walkabiity, all while providing valuable community services via the daycare, preschool, and rent restricted apartments. What an asset! Give us more projects like this.

The project has had one other design review, an Early Design Guidance (EDG) meeting in June, and could gain recommendation from the Northwest Design Review Board if things go well tonight. To comment attend the 6.30pm meeting at Room 202 of the Good Shepherd Center or email the assigned planner, Joshua Johnson (joshua.johnson@seattle.gov).